Of all the hurdles on the photography merry-go-round, exposure may not be the most difficult to understand or implement but it can cause a whole lot of consternation and annoyance to everyone from rank beginners to those who charge a bomb to show up and push a button. While the mechanics of exposure are easy enough to comprehend, an artistic take on exposure can quickly begin to blur definitions and force you to consider throwing all you’ve learnt out of the window.

Put any camera in its Auto mode and most will do a decent-to-excellent job of generating an image that is exposed well. As strongly as marketing would like you to believe that software can do magic on all sorts of issues with photographs, and a deep (or even shallow) knowledge of exposure may not be necessary anymore, rarely will you need that special feature or AI to be used as aggressively if the starting point is of better quality. Getting the exposure correct (although that word itself is debatable) will always give you a better quality starting point for any further work you might want to do.

Let’s back up for a moment and start with the simple truth. The word “photography” is generally accepted to mean "drawing with light". What is unique to this art (or craft) form is the close ties it has to painting/drawing/sketching. In fact those from an art background generally seem to start off stronger in photography than the other way around. A big reason for this being – painting starts with a blank canvas, whereas photography (mostly) doesn’t. One involves painting or creating elements to add to the frame, whereas a stronger focus in the other is keeping only the relevant ones and getting rid of everything else.

In and of itself that statement doesn’t seem particularly important, but look at it from the perspective of exposure and a few key things stand out.

Seeing as how these two – exposure and composition must come together to create a compelling photograph, it is only prudent that we treat them with importance and understand how they work. Of course there is nothing about them I can say that hasn’t already been said by countless others. Most certainly those with more authority, greater depth of knowledge and with more examples to back up their ideas. What I so offer her is my own take on them, the point of view of someone who struggled (and still struggles) getting to grips with these aspects and using them successfully.

So how do you go about getting a good exposure? Let’s do this step-by-step. Exposure simply means getting sufficient quantity of light onto the capture medium (whether film or a digital sensor) inside your camera. Simple enough, but how does that happen?

The lens at the front of your camera. Every lens is different but they all have the same mechanical indicators – focus range, focal range, and aperture range.

Every camera is designed to have a shutter, be it mechanical or electronic. A few modern cameras even eschew the mechanical shutter entirely. The duration for which the shutter curtain (called so since it resembles a curtain) allows incoming light passing through the lens to fall on the film or sensor behind defines the shutter speed, where:

The shutter is a part of the camera entirely and in case of an electronic shutter is simply a method of taking the electrical output from the sensor for the same duration of time, with no mechanical curtain between the lens and film/sensor.

While there are technical and engineering intricacies involved here that I am neither aware of nor qualified to discuss, in layman’s terms the film/sensor is simply the element within the camera body where incoming light from the lens is focused and interpreted for further processing. Sensor technology varies from company to company and here is my absolutely unscientific but totally practical definition of the impact of the film/sensor on exposure.

The sensitivity of film to incoming light is fixed, but that for digital sensors can be varied either manually or automatically by camera algorithms. An increase in sensitivity (ASA value for film or ISO number for digital) allows a brighter image to be recorded on the film/sensor for the same values of aperture and shutter speed, and a decrease in sensitivity creates a dimmer image. The only trade-off is an increase in grain (film) or noise (digital sensor). While modern digital sensors have made tremendous technological leaps and some even display ISO invariance, i.e. no discernible increase in noise with an increase in ISO sensitivity (too technical, will not discuss here), they will still show increasing noise as the sensitivity keeps increasing. At some really high ISO values (think 6400 and above) along with noise most cameras show visible degradation in their colour reproduction and tonal range (the range of tones from darkest to brightest).

So now that we are aware of the three basic elements that control exposure in an image, how do we put this to use? You may or may not have come across the term ‘exposure triangle’. While simple enough to understand as a concept, I find that associating a geometric shape to the concept makes it harder to use when one needs to. Instead, I prefer using the concept of the ‘bucket’.

The exposure you want is whatever you’ve decided is required for a particular image, either based on technical requirements or artistic ones. Once that exposure level is decided, the exposure bucket needs to be filled up to that level using the three variables available – aperture, shutter speed, ASA/ISO.

So assuming you start with a fixed ISO/ASA number, how do you go about selecting the aperture and shutter speed combination to fill up your exposure bucket to the required level? There are only two considerations – technical and artistic.

Technical – A larger aperture {smaller number is the f/number) ratio} allows more light onto the film/sensor, and vice-versa. The largest lens aperture on most lenses is not the setting where the lens performs at its best. If you’re buying a newer lens, especially one that is slightly expensive the chances are it might be really good at its largest aperture, but it will most certainly still improve a little bit if you select an aperture that is one or two f-stops smaller. Let’s say the maximum aperture on your lens is f/2.8. If you change that aperture to f/4 or f/5.6 you’ll find the lens delivers much more detailed (more contrast, sharpness) image. At the same time you might want to keep in mind that selecting too small an aperture (smaller than f/11 on a Micro Four Thirds camera, f/16 on an APS-C camera, and f/22 on a full-frame of 35mm camera) may cause the image output to start degrading again.

A slower shutter speed {smaller number in the shutter-speed denominator- 1 / (number)} allows more light to be recorded on the film/sensor and vice-versa. However, holding the camera steady enough at speeds below 1/60th of a second (such as 1/30th, 1/10th, ½”, or multiple seconds) has the potential to introduce blur into your photo, either because you accidentally moved (yes, even a little bit) or there was movement of any object within the photo (unless that’s the effect you want). This unintentional blur may be reduced and much slower shutter speed may be usable in case your camera is equipped with stabilisation (either mechanical or electronic).

Artistic – Provided your point of focus is precise, a larger aperture {smaller number is the f/number) ratio} will allow more of the objects in front of and behind the focus point to be blurry. These regions of blur are referred-to as out-of-focus elements. The quality of these out-of-focus elements is what is popularly known as ‘bokeh’. Whether or not you personally think more blur is preferable than more areas of sharp focus is subjective, but it is something to be aware of and understand its artistic value.

A slower shutter-speed (ignoring any unintentional motion blur) allows elements within the image to be recorded as blur trails if they are in motion. Think of a car or bus on the roads passing behind the person whose photograph is being taken. The subject stands still while the bus moves. In the time it takes for the picture to be taken (which is defined by the selected shutter-speed) the bus has moved in-between the points at which the shutter opened to start recording on the film/sensor and when it closed to stop recording. This motion will be recorded as blur. The longer the amount of time for which the shutter stays open, the more of that motion is recorded, and the larger the area of motion recorded. This can be used artistically to depict motion and the passage of time.

Once you’ve decided which trade-offs you’re willing to accept and the settings you’d like to control and maintain in order to achieve the exposure level you’ve chosen to obtain, all that’s left is taking the shot and making sure you’ve got what you wanted. This can be as simple as pressing the shutter button, but make sure you’re aware of what the background contains, what the edges of your frame look like, and whether the platform you’re shooting on is stable enough for the selected shutter speed. If these facets confuse you or raise questions in your mind that you don’t have answers too, then fret not – this and much more shall be covered in future blog posts.

While this was by no means a detailed explanation of other intricacies of determining and achieving the desired exposure in-camera, it does provide a strong foundation to build on. Making sure you’re at least comfortable juggling the factors involved in establishing the required exposure will ensure everything coming beyond that determination is easier to achieve. 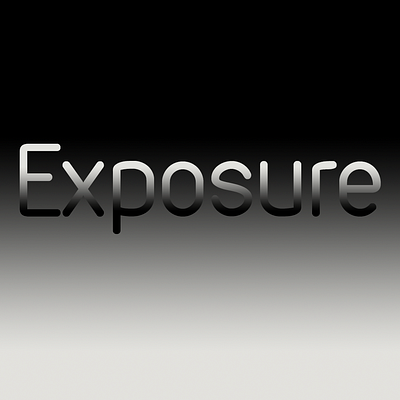